Julie and I have been growing orchids since the 1980’s, but didn’t really get bitten by the orchid bug until 1999. That’s when we purchased an assortment of orchids, including our first Paphiopedilum, at the Orchid Society of Minnesota plant sale. That first Paph captivated me and sent me down the road of specializing in Paphs, while Julie’s interests took on a wider range of genera. By 2001, I was already toying with the idea of hybridizing, and started by purchasing compots and then flasks so that I could learn how to grow seedlings and also acquire quality plants by picking the best of a group. While this learning process was going on, I also began to acquire divisions of awarded and other high quality Paphs to use in breeding. 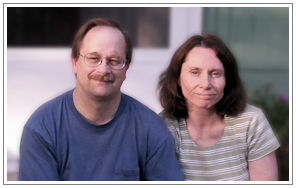 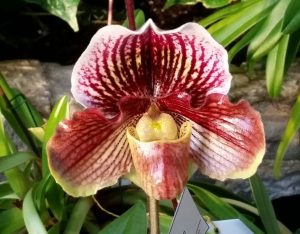 In 2004, with the help of my good friend and mentor, Rod Knowles, I made some of my first crosses and there was no turning back. Early on I decided to concentrate on trying to produce miniature complex Paphs and compact Paphs in general, but have made other types of Paph crosses when the opportunity presented itself. As of March of 2016, I have sent over 180 crosses to the lab to be flasked. While not all these crosses have produced offspring, enough have that our house was being overrun by seedling Paphs. To take back our house, we constructed a small greenhouse in the summer of 2010.